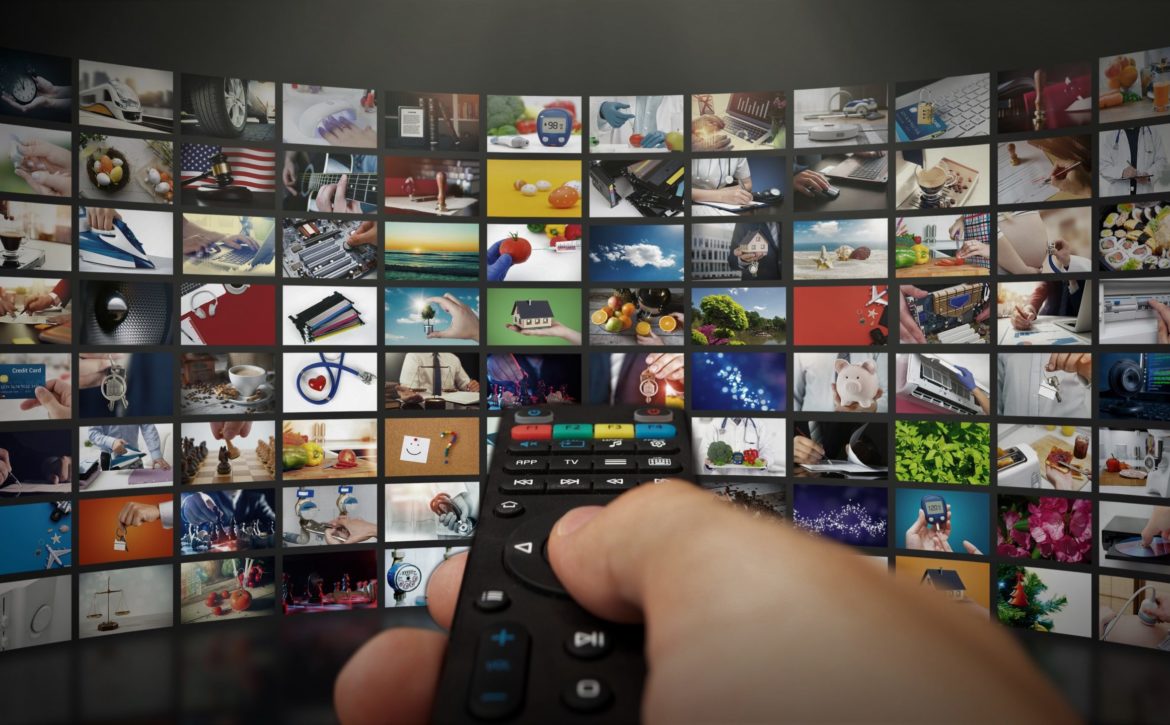 The technology in Automatic Content Recognition (ACR) platforms has evolved rapidly since its humble beginnings as a music-detection tool in 2011. Today, this technology can be used to recognize more than just music and has expanded to multiple media markets. As per estimates from various vendors who work with ACR data, more than 100 million households around the world have opted-in to enable Automatic Content Recognition on their Televisions and smart devices.

Of the various markets that can be reached through this medium, few are as active and rapidly growing as the video game market.

The spread of the COVID-19 pandemic saw a sudden increase in the number of people staying at home for long periods of time. This in turn caused a steep rise in the number of gamers. These include people playing a video game for the very first time and those playing one for the first time as adults. This caused several people to (re) discover a passion for gaming that helped the video game industry join the pool of select industries that benefited from the pandemic. It is expected that a sizable portion of these new gamers will continue to be active consumers for the foreseeable future.

Over the past few years, Smart Televisions (TVs) and devices such as Roku, Chromecast, and Apple TV have found their way into millions of households across the world. Traditionally used to consume movies and television content, some of these devices are now doubling up as gaming platforms. Google has brought its cloud gaming service – Stadia – to the big screen using its Chromecast series of devices. Similarly, Apple has invested heavily in its own gaming service called Apple Arcade. Amazon has recently entered the fray with its Luna gaming service, which will be connected to the big screen through its Fire TV line of devices.

These services are improving accessibility to games for all audiences, particularly among people who did not invest in a dedicated game console or a gaming computer.

Needless to say, it is a very intriguing opportunity to apply ACR technology to this rapidly growing market, the foundation of which is a Reference Fingerprint of the content to be recognized.

A Reference Fingerprint contains the necessary content required to correctly identify a piece of media, in this case, a video game. Depending on the requirement, a fingerprint may contain either video, audio, or both video-audio identifiers.

On Smart TVs and devices which have opted in to enable Automatic Content Recognition, a sample of the game currently being played is cross-referenced with the reference fingerprint, enabling the recognition of the game. Video games are interactive media, so people may interact with games in different ways. For ACR to work as intended, the reference fingerprint needs to be created with precise identifiers, so that no matter how the user chooses to play the game, the content is still recognized. 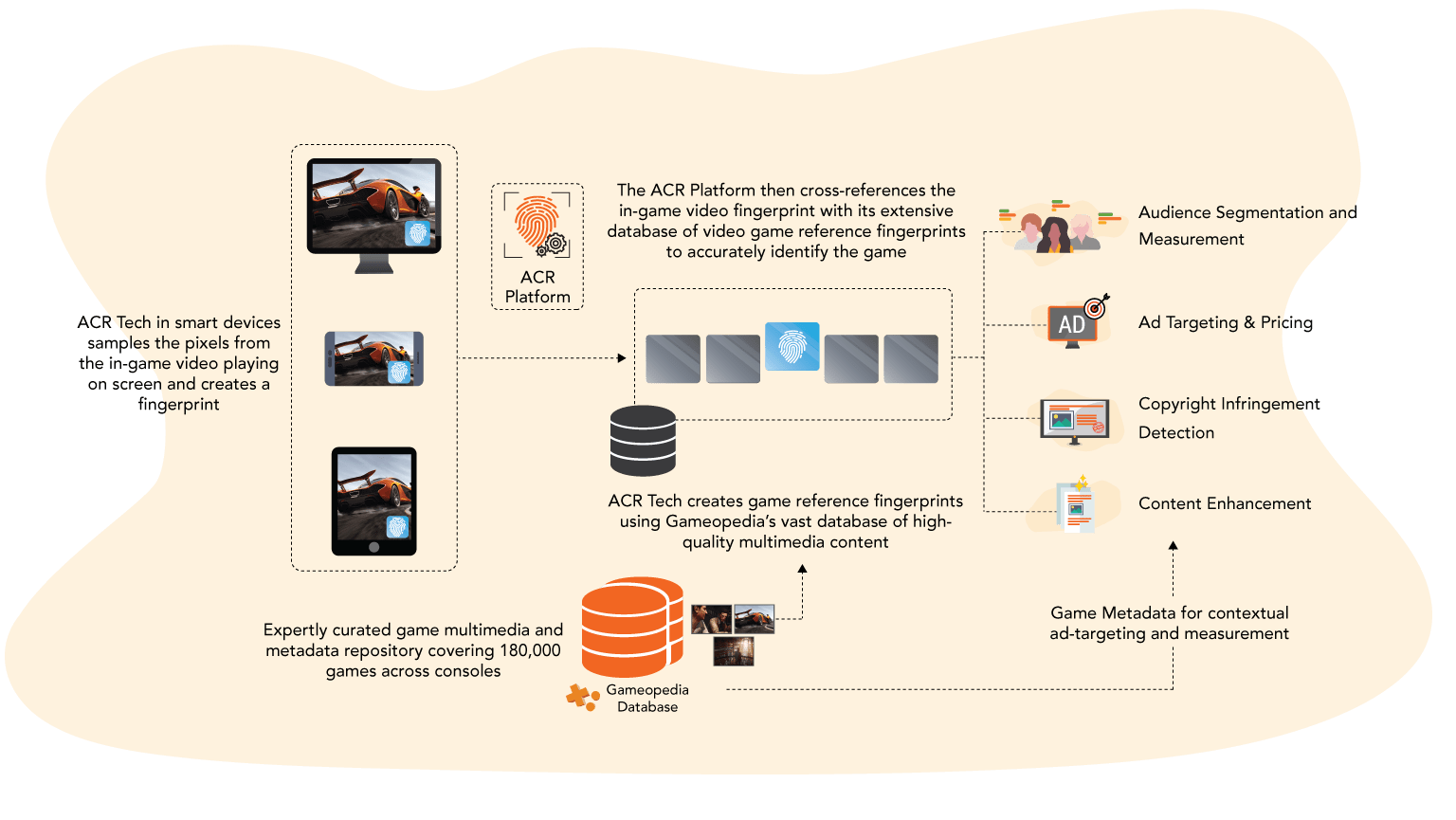 At Gameopedia, we have developed a process that produces accurate reference fingerprints, enabling smooth content recognition.

The Need For A Reference Fingerprint Database

The video game market is in a constant state of evolution, with player tastes changing quite often. On one hand, there are thousands of games coming out each year, and on the other, a small set of ‘live-service’ games are constantly adding new content to retain their existing player base. Thus, it is essential to not only identify which of the new releases will go on to be potentially popular but also keep track of existing live-service games that continue to remain popular.

Here at Gameopedia, we thrive on keeping up with the latest trends in gaming. Our team of gaming experts can help curate reference fingerprints from a new title, on Day One of its global launch. This is critical as interest in a title tends to be at its peak in the first few days of its launch. Likewise, we can provide updated fingerprints for live-service games whenever they are updated with new content.

Audience Segmentation and Measurement: An ACR Platform can be used to identify and measure the audience size for a particular game. A reference fingerprint is used to recognize the content of a certain game being played on ACR – enabled devices and various statistical inferences can be made about the audience for that game. This data is quite valuable as it helps estimate the global sentiment towards a game.

Ad Targeting & Pricing:  While video games of every genre have their own dedicated audiences, some genres inevitably have larger audiences than others. For advertisers, it is important to identify games from popular genres (a few of which include Action, Shooter, Adventure, and Driving) to set up suitable targeting and pricing structures. It is here that a reference fingerprint bundled with relevant metadata fits into the picture. The fingerprint identifies the game and the metadata quickly identifies the genre that the game belongs to, thus allowing the advertiser to estimate the popularity of the game.

Content Enhancement: Automatic Content Recognition Platforms can also be used to enhance the user’s experience while consuming a piece of content. Manufacturers of Smart devices may choose to partner with game publishers to provide interactive experiences to the users when a certain game is being played on the device. Such experiences include guides with helpful advice on game progression, additional media such as in-game lore entries, unseen cut scenes, and so on.

Another application of ACR Platforms in enhancing user experience is to provide additional game recommendations, based on the users’ current selection of games. ACR can identify the game(s) that a user chooses to spend a lot of time upon, and this information can then be utilized to provide recommendations for games that are likely to appeal to players of the identified game.

Copyright Infringement Detection: Video game publishers tend to be a bit lenient with how their IP is used by the public, as seen by the rapid distribution of video game footage on media outlets like YouTube and Twitch. A lot of publishers in fact encourage users to record, stream, upload, or otherwise distribute footage from their games, as this has been proven to help with raising awareness of these titles.

However, publishers may not always want their IP to be distributed in such a manner. For example, some publishers provide early access to their games to a select set of users, usually in an early stage of development. At this stage, publishers would not want footage from these early builds to reach the public at large. This is where Automatic Content Recognition in game content recognition and allows publishers to catch any potential cases of copyright infringement.

We are on the cusp of a new generation of gaming. With the launch of two new, powerful game consoles and the rapid adoption of Smart TVs, the core gaming market is as strong as ever. And with cloud gaming poised to increase the spread of the market, now is the time for building a robust, up-to-date reference fingerprint database for video games. This truly is the next key chapter in the reach of Automatic Content Recognition Platforms and smart devices.